Drawing, philosophy and professional life: can drawings be more than decoration?

Each of these was posted with an image I had been working on - which I've included below - so the question and image could be seen together. Viewing these tweets invited a movement between text and image, with the hope that there could be something which occurs as attention moves between them. Glimpses of insight, perhaps. 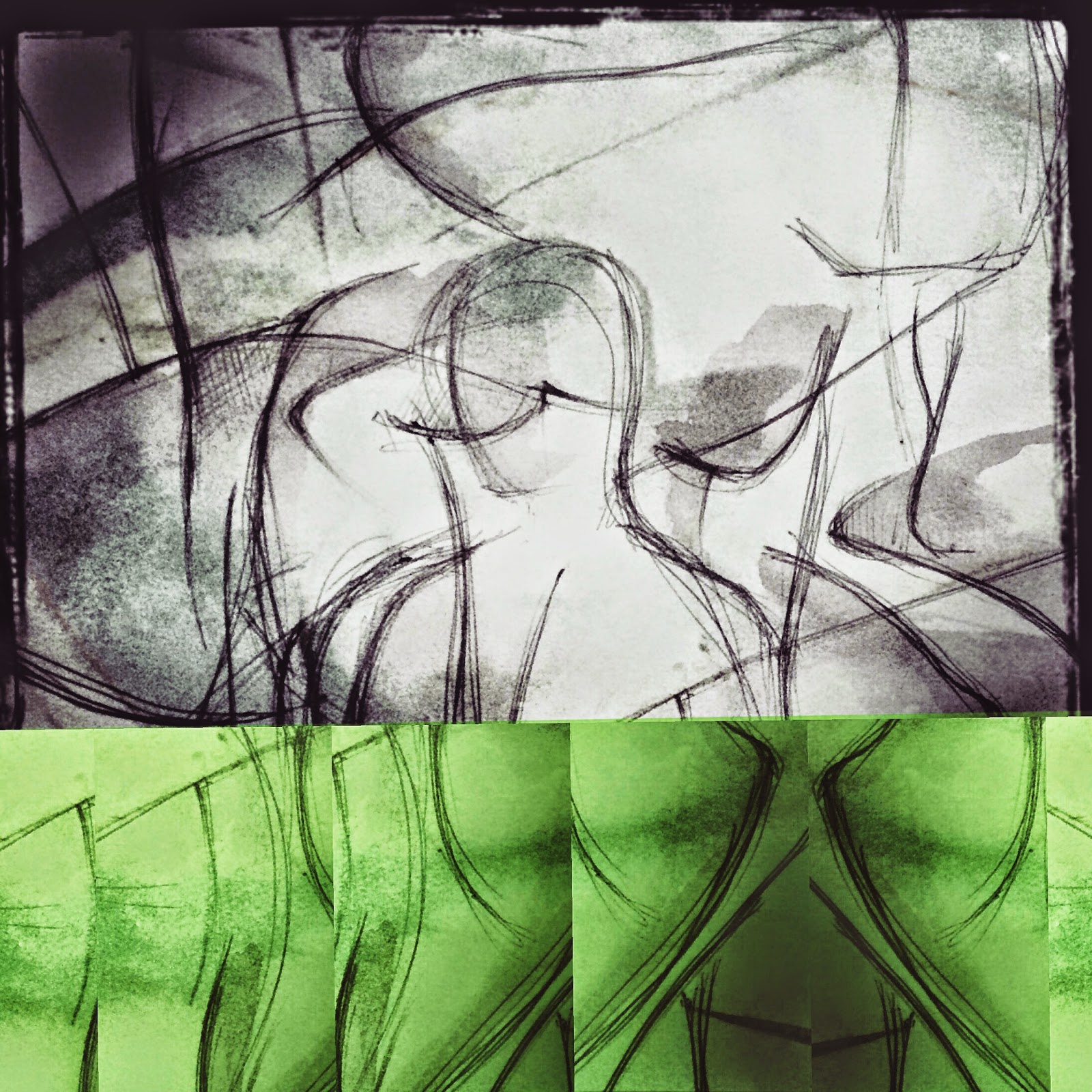 This is abstract stuff, and potentially frustrating for the ultimate object of this work - insight for teachers, social workers, nurses and the like. I stop and ask myself: what do these images achieve? What is happening as they are fragmented, overlaid with colour and line? If these images are viewed through a 'realist' lens (where the object is direct representation), the best they can surely be is decoration. I am aiming beyond that, and I may need to re-trace my steps if in a process of playing and wondering they do become decorative.

So what is going on in these images, as far as an 'answer' can be given? At this stage, far from any practical application to professional life, they are my efforts to develop an alternative to professional life measured, copied, categorised in what I have previously called the evidence based paradigm. In these naive efforts, I am picking up philosophical ideas that interest me and that I think may offer an alternative way of investigating what people do in professional life. I want us to 'see' professional activity differently, so we open up different questions and gain new insights. I will try to summarise some of this journey of thinking which is still playing out, hopefully towards a practical outcome. Some of it may be useful, but not all may seem well developed - it is my playing with ideas and images.

"…the life of others can be discerned and identified in its manifestations. Knowledge of others is possible because life produces forms, externalises itself in stable configurations; feelings, evaluations and volitions tend to sediment themselves in structured acquisition [acquis] which is offered to others for deciphering." (Ricoeur, 1981, p.50)

This is the reading or interpretation of others lives through texts, but importantly, Ricoeur rejects a romantic definition of 'interpretation', or any seeking for hidden meaning in a text, and instead opens up the possibility of a more abstract vision of the text, or a life.

In fact, Ricoeur's very rich philosophical work on this topic does not attempt to over simplify the working together of biography, experience and narrative, but presents narrative - and the idea of the text - as a place of multiple marks and connections made complex when seen socially (as narratives are interwoven) and temporally (as events play out in time).

“Social time, however, is not only something that flees; it is also the place of durable effects, of persisting patterns. An action leaves a 'trace', it makes its 'mark' when it contributes to the emergence of such patterns, which become the documents of human action.” (Ricoeur, 2008, p.149) 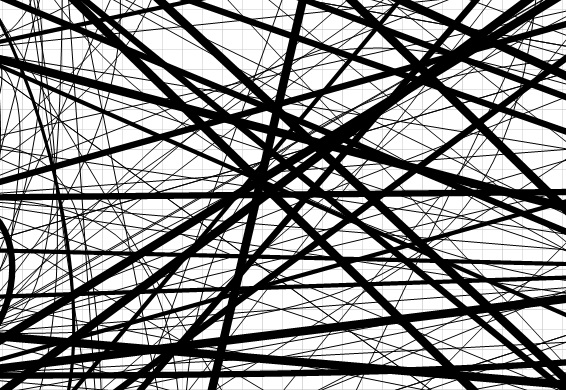 In my thesis, I realised many of my insights played with these ideas, as I worked to 'read' real and conceptual marks in Ricoeur's narrative space.

Taking up ideas of visuality and space through Deleuze 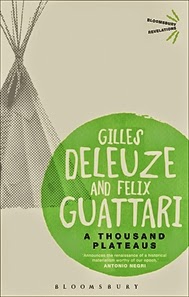 Towards the end of writing my thesis, I started reading a text which was in many way miles away from Ricoeur's books - Deleuze and Guattari's A Thousand Plateaus: Capitalism and Schizophrenia. Apart from being a work of continental philosophy whose authors had only recently died, there is - superficially - little in common between the narrative hermeneutics of Ricoeur and the (seemingly) anarchic thought experiment which is A Thousand Plateaus, which follows the authors' previous work in the Capitalism and Schizophrenia series, Anti-Oedipus. Brian Massumi, who translated the text, suggested it was a "...constructive experiment in schizophrenic, or 'nomad' thought" (Massumi, 1993). Putting observations about the type of philosophy it represents and what I didn't like about it, A Thousand Plateaus fascinated me superficially because of the way in which it was a text which developed visual space(s) and connected topics, and insisted on a distinctive way of seeing which rejected simple, objective, superficial categories of things. Some of it is insane and incoherent to me, but in places, I found a connection with the way I had begun to read Ricoeur's work on what I called the narrative space. It read like an artists' thinking process.

Beyond A Thousand Plateaus I looked for a way forward. In my last post, I said I'd found a text which helped me focus on the visuality and connectedness of Deleuze's work: Jakub Zdebik's (2012) Deleuze and the Diagram: Aesthetic Threads in Visual Organisation. Like the trail of reading that got me this far, I was shamelessly practical and pragmatic, looking for ideas that would help me find a way of eventually connecting ways of drawing and image making to the everyday professional life of social workers, teachers and nurses. This book seems to be doing that as I grapple to understand it. What drives me here is not primarily an intellectual motivation, but a drive to find some principles or framework to explain a relationship between life and drawing: otherwise I would simply be decorating. I mentioned some initial points of connection in my last post (on the topic of the diagram); here I set out further reflections on material I am working with in that text. Some of this thinking I will relate to images I have been making from my drawings.

Like Ricoeur (but in different ways), Deleuze rejects traditional representational, reproductive, imitative (mimetic) drawings, moving, as suggested by Zdebik (2012) "...into modes of representation of a far more problematical and uncertain nature." (p.74). Rather than try to summarise the whole system of thinking underpinning Deleuze's efforts, I pick out a set of ideas I find interesting. I write as I begin to understand, which is a dangerous but productive place! 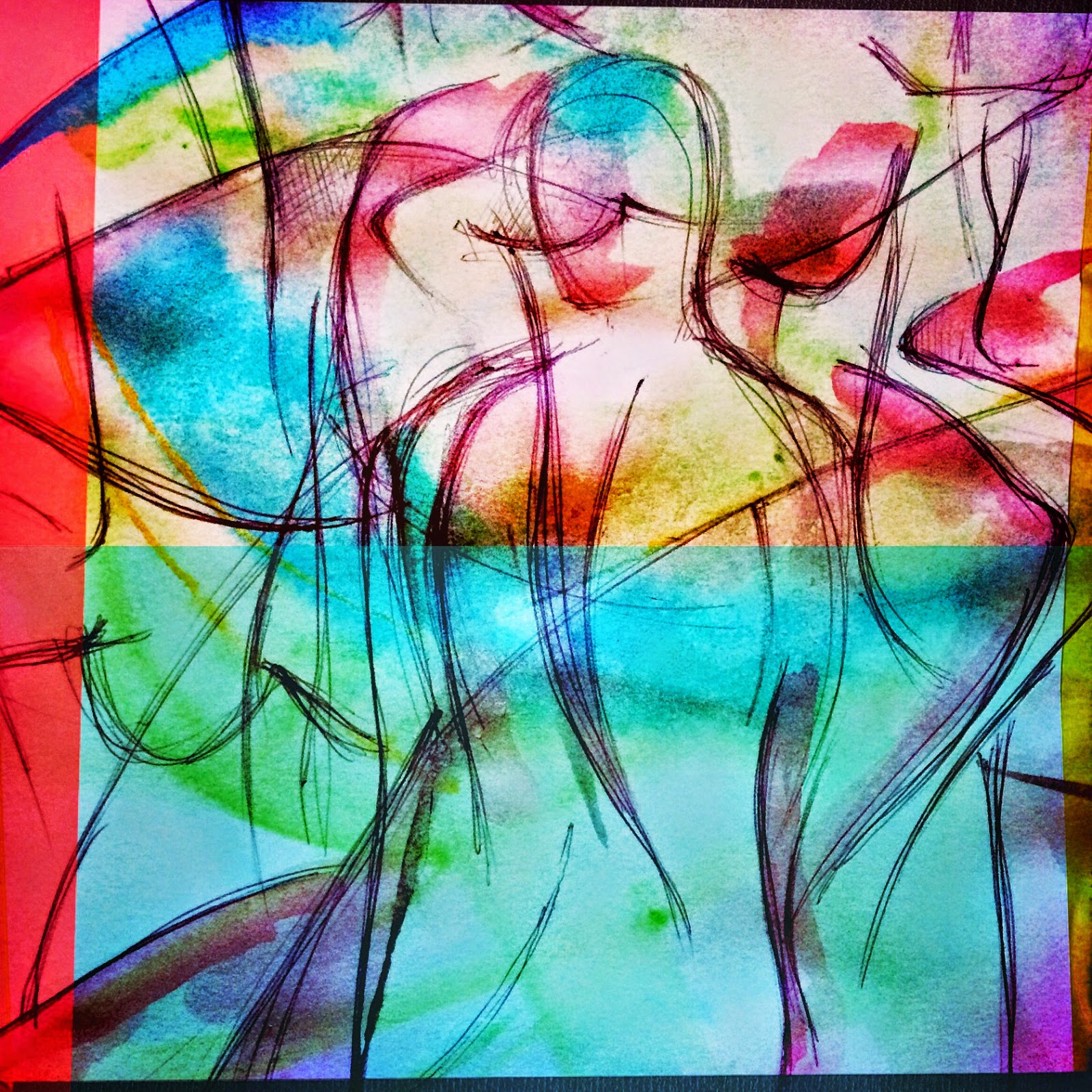 Stacking, simultaneity and the allagmatic

Zdebik (2012) relates the philosophy of Gilbert Simondon to Deleuze's work in considering the "...possibility of collapsing the distance between images and concrete things" (p.43). Some ideas can be pulled out of Zdebik's (2012) text, with apologies to the author, to convey a sense of his argument. Towards this aim, Simondon's work discusses the idea of analogy (a comparison between things), where this deals with "...understanding how connections can be made between disparate elements" (Zdebik, 2012, p.43). This may be useful - drawings and professional life are two 'things', but may be related through analogy.

The idea of the analogy is developed by Zdebik (citing Simondon's work) through the idea that two things - structure and operation - can be related. Structure and operation of a thing are related, although they do not look the same. Simondon calls this the allagmatic and emphasises that the term addresses an ontological relationship between two things - the term ontology describing what things are and the nature of their being (a bit like the idea of abstract functions in the diagram in my last post). The purpose of the allagmatic is to "...visualise an unrepresentable process that is no less actual because it is virtual" (Zdebik, 2012, p.43). There follows (pp.47-49) a quirky discussion of the 18th and 19th century fascination with crystals, in order to talk about ideas of transformation (via the growth of crystals) and the process of becoming where the structure and operation of crystals are related. As it happens, Simondon created his own philisophical system which created analogies between the operation of crystal formation and very different structures, including human development. Putting crystals aside, what interested me was Zdebik's (2012) claim that this 'worked' because Simondon moved from the known to the unknown by connecting a similarity of operation. In other words, crystal formation helped Simondon talk about similar processes at work in other systems, such as human development. 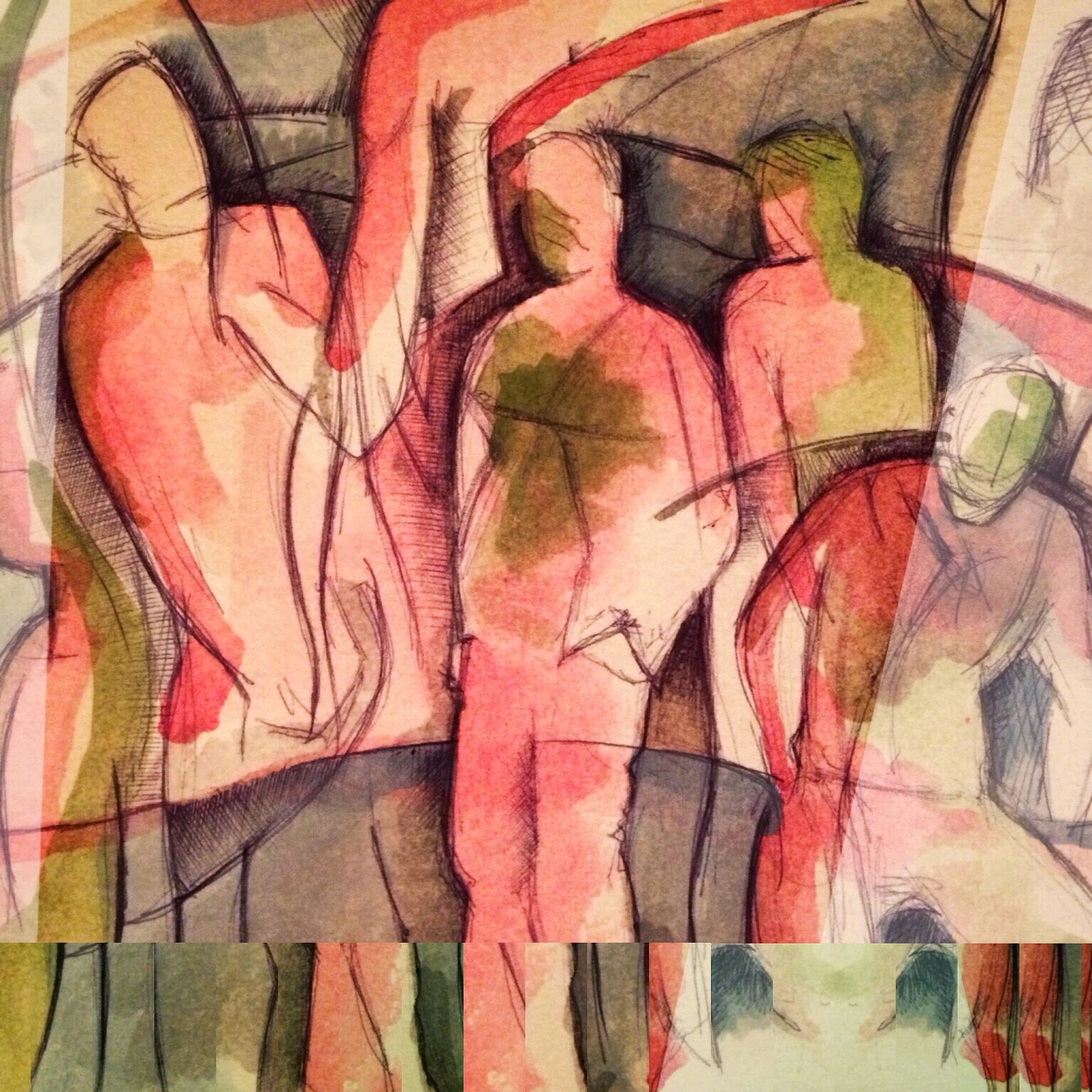 Simondon's idea of the allagmatic is described by Zdebik (2012) as more than an idea. The allagmatic requires visualisation and its graphic form mediates between concepts (p.53). Zdebik (2012) says that presenting an analogy visually does something interesting:  "...spread on a spacial surface, we do not perceive something as if it were another, but instead, something and another at the same time. The function of the allagmatic collapses two things, makes them one" (p.54).

This interested me because in my own work I often find there is something productive about seeing things together, collapsed into one image, where images are fragmented, redistributed or framed by lines. 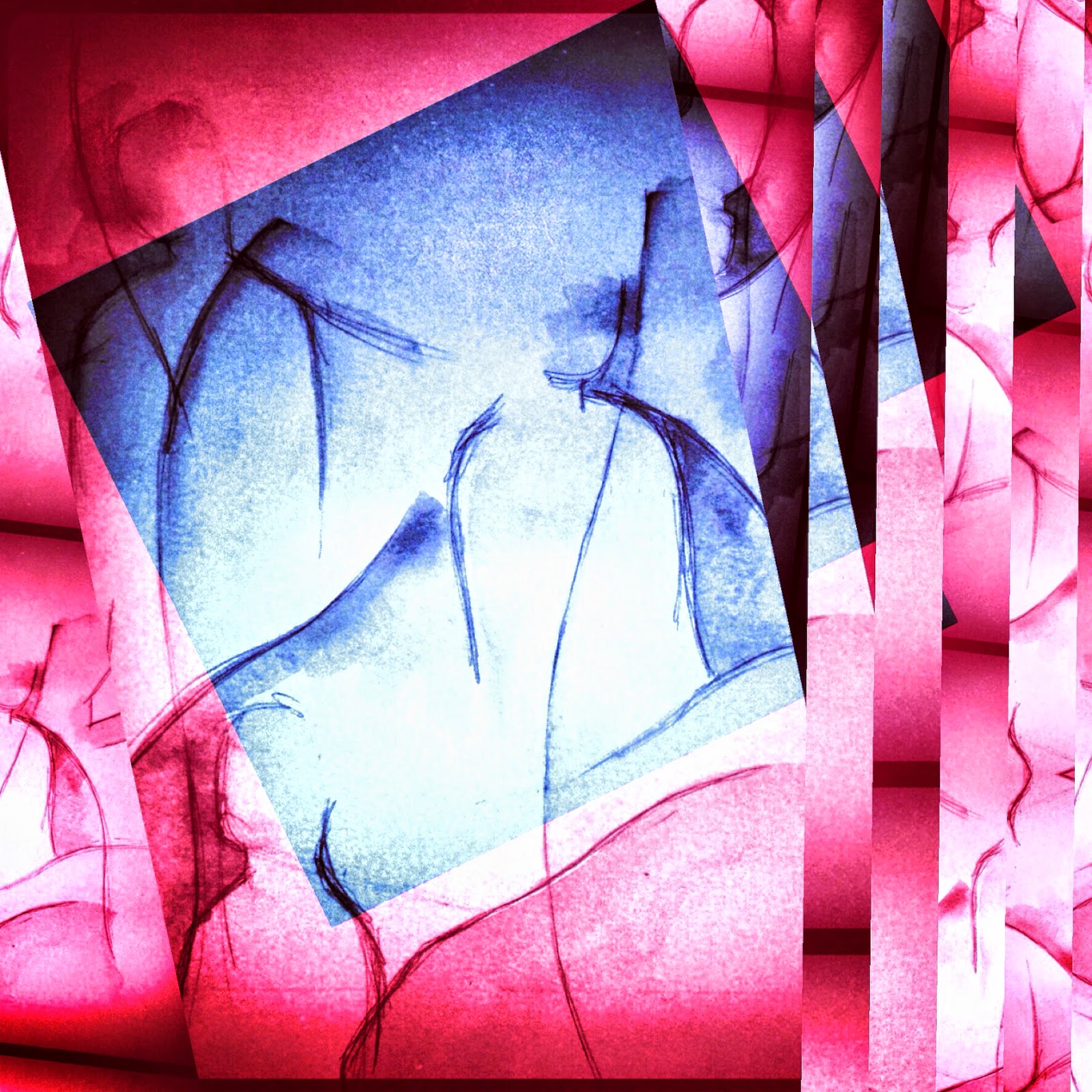 Zdebik (2012) presents this allagmatic as an assemblage of two orders of things, or a "...stacking up different levels of depth", where things are not resolved, but the schism between them becomes a "productive rift" (p.56). I have tried to work this out by thinking visually in my own visuals: lines or fragments do not 'fit' neatly onto drawings, they cut across, mix up and force us to look at something in a different way in my own sketches.

Clearly, I am at an early stage of my thinking and drawing here, but one that I think will be useful before I rush to develop any simple or 'neat' methodology for drawing professional life. I am resisting that, and prefer to draw on concepts such as the allagmatic (or the principles behind such concepts) to develop images that are not 'copies' or direct representations of professional life, but function as analogies, drawing attention to what Deleuze talks about as functions or operations.
Posted by Ian Robson at 02:16

How can we see experience, organisation and practice differently?

Can we generate new questions by stepping in and out of the abstract?

Can drawing move beyond representation and become a generative tool?